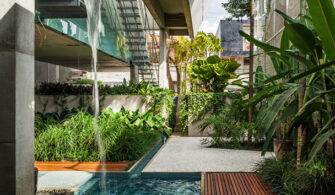 7 types and varieties of ferns for home growing

The humble fern is one of the most commonly grown plants in households and gardens around the world. What makes it so popular? Well, for one, they come in different shapes, sizes, and colors. With over 10,500 species to choose from, you can have a fern corner in your home or turn every corner into a fern corner. 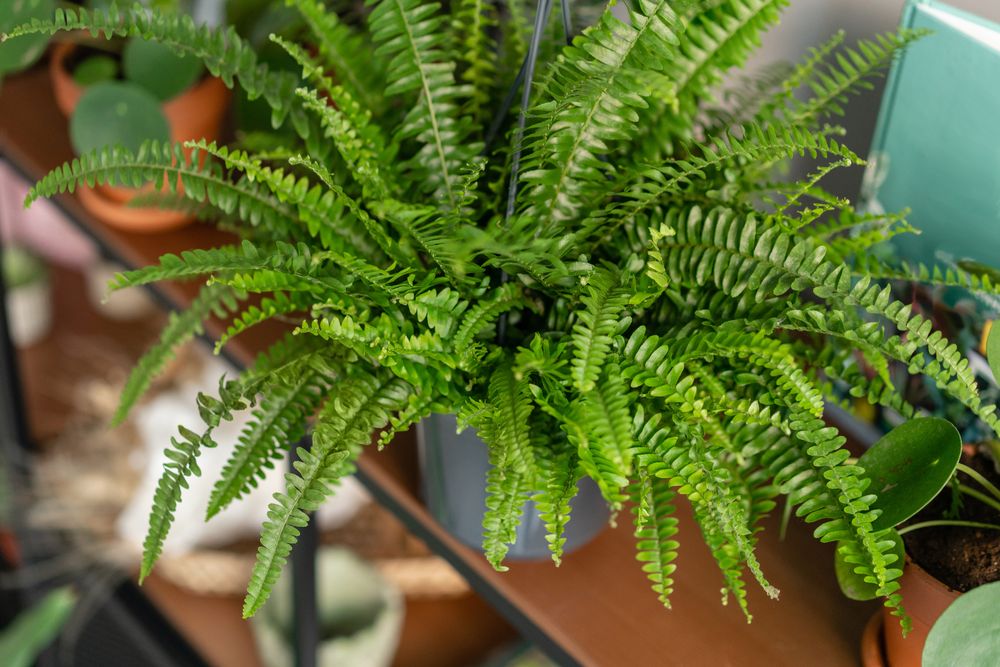 Ferns are adorable plants that defy categorization. They can be dwarfs just an inch or two above the ground, or they can grow to over 25 feet tall. Some are evergreen while other species are deciduous. When you mix and match your ferns, you can mix and match the evergreen species or add an evergreen or two to a deciduous tree to liven things up.

And did we mention that ferns are exceptional both indoors and out grow well? Nothing seems to beat ferns in terms of versatility, diversity and adaptability.

The first ferns appeared around 360 million years ago, during the heyday of the dinosaurs. After these giant animals became extinct, ferns continued to spread and diversify to adapt to each microclimate. This resulted in more species of ferns developing over time. Some of these species did not look like the original ferns. And with the changed appearance, new qualities emerged that help the ferns to survive the harsh conditions around them. This explains why we have four species of fern today.

Whether you prefer evergreen ferns or those that thin in in winter and miraculously sprout again in summer, there are so many varieties of ferns for every taste and every decorative need. For reasons of space, we focus only on the most popular and exotic varieties of fern for home growing. 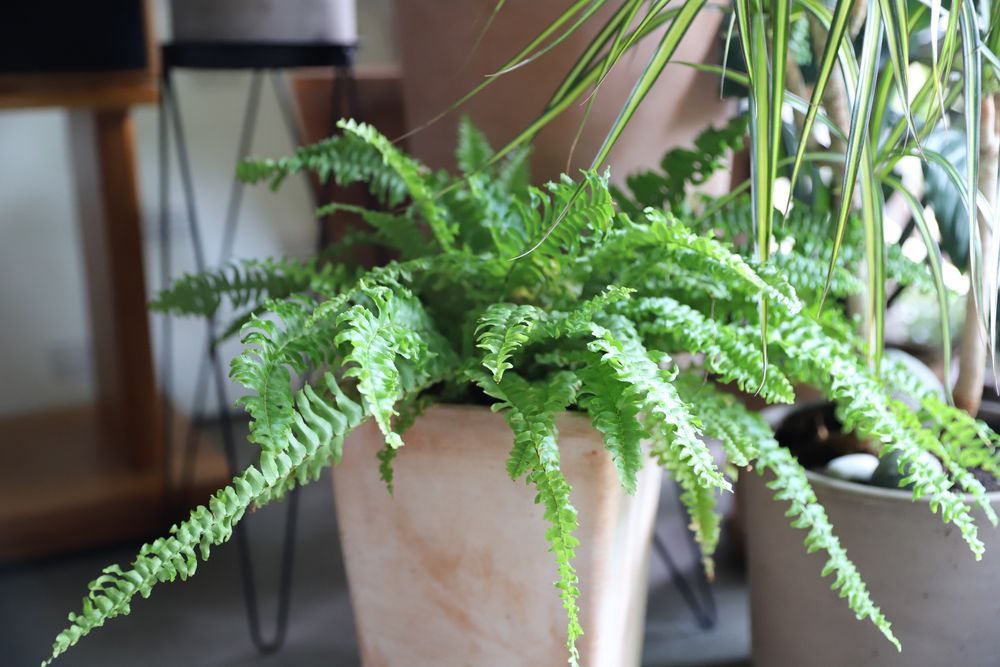 The Boston Fern is one of the easiest ferns to grow and care for. Although you can find it in front of people’s porches, this fern doesn’t like direct sunlight. In fact, it prefers cooler places in your house where the light is medium to bright.

The leaves of this fern are long, convex, and light green. It grows well in both a pot and a hanging basket. The soil can be loamy or an all-purpose flower mix. As long as it is well drained, the fern will not complain.

Moisture is another requirement for the Boston fern. If your fern begins to wither and the stems wither and die, it is likely because the air in your home is too dry. Spray the plant twice a week to solve this problem. If you don’t have the time or inclination to spray the fern, place the pot on a tray with water and some pebbles so the roots don’t touch the water.Cinnamon Fern

When you’re tired of the predominant green color in your yard or house and want to spice things up, plant the Cinnamon Fern in a pot and watch its dramatic color change the setting. What better way to stand out from all of these ferns than with a color change?

Like some fern varieties, the cinnamon fern has a low tolerance to cold weather. It does not tolerate frost well, so you need to bring it indoors before the first frost in autumn. Plan your planting after the last frost in spring.

However, it is an adaptable fern that will tolerate all types of soil. Even wet earth will not take away the desire to grow and spread its cheerful colors in a dark and wet place in the garden. Thanks to its resilience and the colorful fronds it is a wonderful ground cover plant. 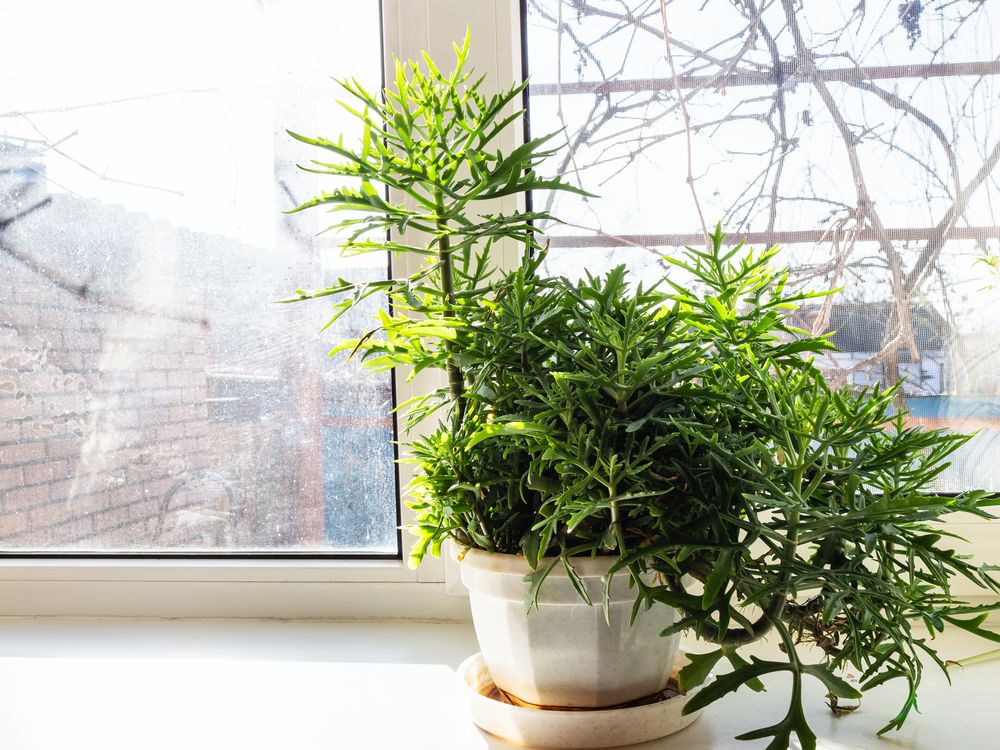 The origin of the name is not clear, but you don’t need a reason to grow the staghorn fern at home. One of the fast growing ferns, once the rocky crown has developed, there is no need to bury it in soil or any other growing medium. Just nail the crown onto a board so it doesn’t roll away and be left that way. The leaves will pop out from every nook and cranny of the crown, giving it an otherworldly look and feel.

You can even nail it to the wall or ceiling of a shed or greenhouse. You can do a lot with the staghorn fern. So you don’t have to repot or change the soil twice a year.

The installation of the staghorn fern reduces the care and maintenance effort by half. It will also help you avoid common problems like overwatering the plant. To water the mounted stag horn, simply drizzle water over the crown and board until it gets damp. Do not water it again until the surface of the fern is completely dry.

The descriptive name tells you everything you need to know about this exotic fern. As an epiphytic plant, this fern does not need soil. It simply attaches itself to a log, mossy log, or even a rock and continues to grow and thrive.

The fern fronds also don’t look like the average fern fronds of a garden variety. They are more like leaves with their light green colors and lack of feathers. The leaf edges are wrinkled, which gives the plant a dynamic look. The fronds surround the center of the fern, which looks like a bird’s nest in every way except for the lack of eggs and bird feathers.

So why not, instead of wasting time and hard work putting the plant in a pot to grow? easy to assemble. Just like the staghorn fern, you can hang this fern on a wall or tree and watch it spread its lush green fronds.

Keep these ferns out of direct sunlight. Therefore, you should mount them on the tree trunk directly under the canopy. It practically feeds itself and does not need any fertilizer to grow. 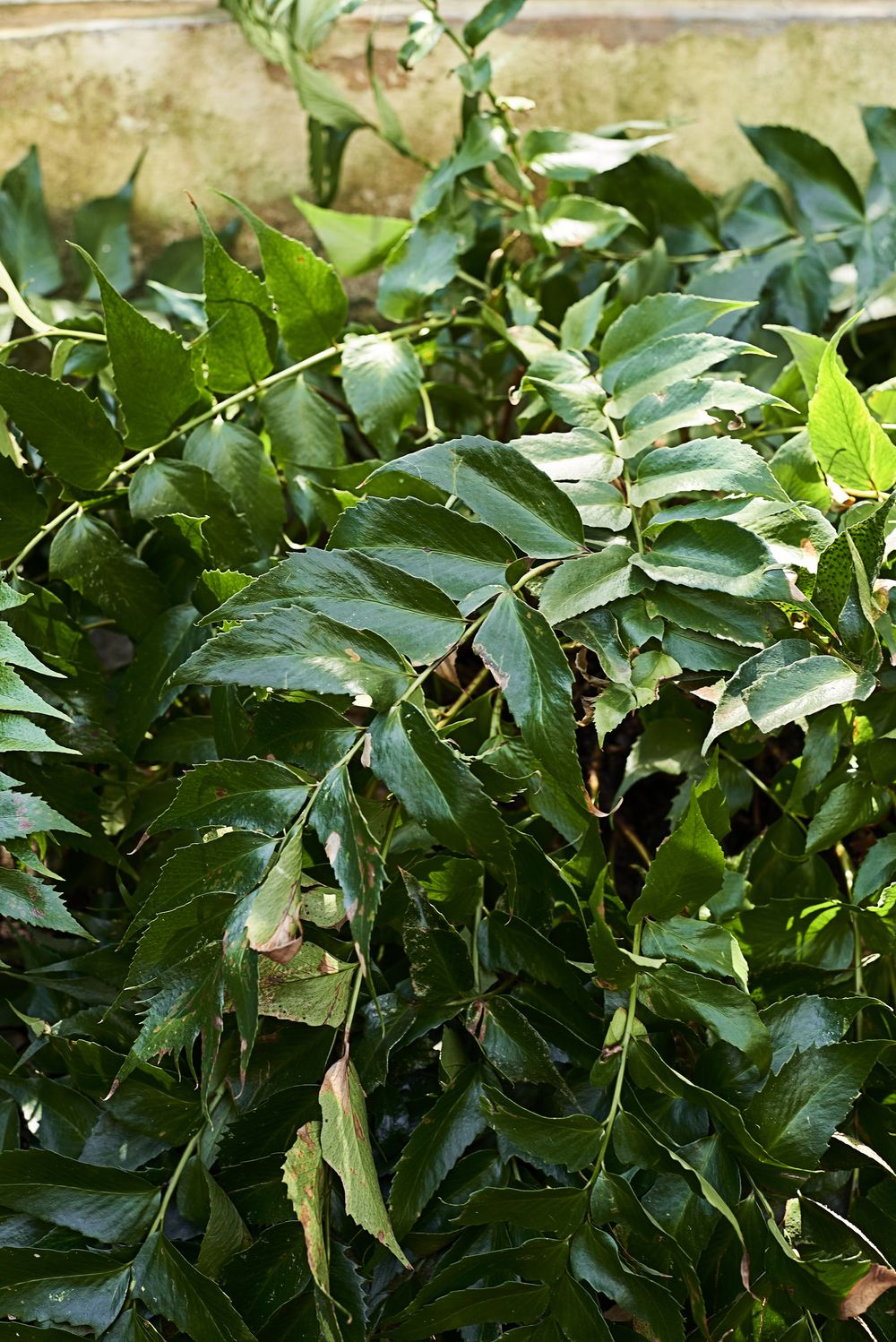 This fern often grows in dark corners of the garden and fills a secluded corner in an office or dimly lit room. This is because it prefers full shade over partial sun and can even survive in dark places with little light.

Despite this tendency to the dark side of any location, the holly fern has glossy dark green leaves that shimmer and reflect the light falling on them. It’s the type of hardy fern that grows in just about any place you place it. The only exception to this rule is cold temperatures.

If the temperatures drop in winter, the plant will struggle to survive. It might drop its leaves and the lush fronds will wither and wither. To save your fern, bring it indoors and keep it in a warm and humid place all winter. It will regain its green shine in no time and keep growing. You can take it outside again in the spring.

So far we have researched small evergreen and deciduous ferns.Get to know the Australian tree fern. A fern with a name, but actually a tree with a name. It averages 40 feet when growing in its natural habitat in Australia. However, that shouldn’t stop you from growing it as a houseplant. All you need is a regular cut to shorten it to about 1.5 to 2m if you wish.

Although this fern is classified as a tree, it has no flowers or fruit . Its green fronds do not change color either in autumn or in winter. Then why is it called tree? It is the trunk that looks like a palm trunk. When the fronds die of old age, they fall down, leaving a stub that becomes a building block on the trunk. Over time, the trunk grows taller and thicker, while the canopy remains slender and fragile at the top.

And unlike other ferns, this fern tree will thrive in both full sun and partial shade, so only grow it in yours Garden when you are blessed with exceptionally humid summers and warm winters. Florida, parts of Texas, and southern California are ideal locations for this fern from Down Under. 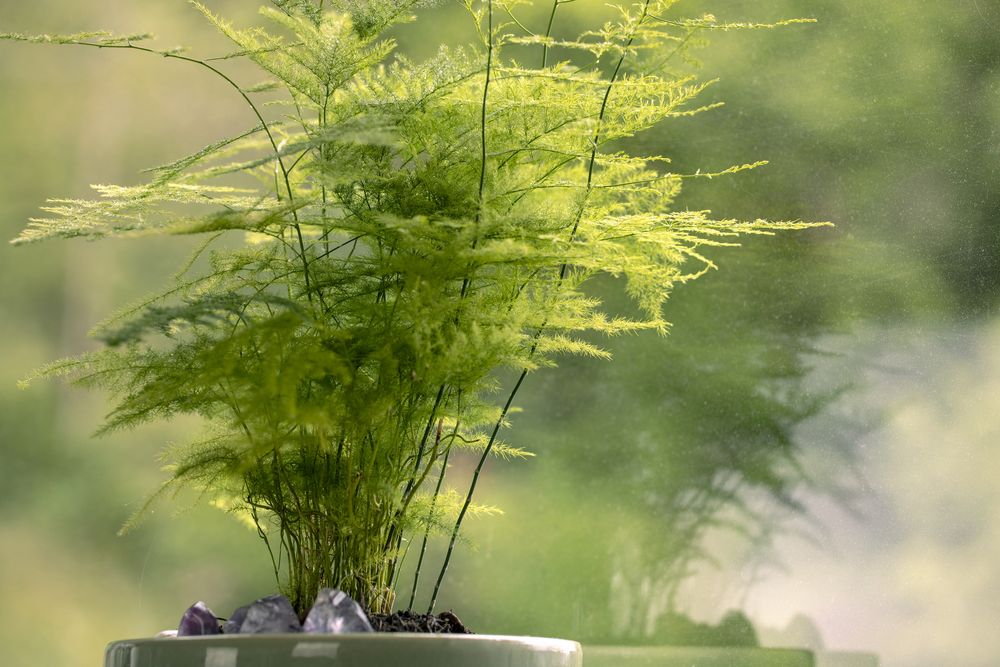 You can think of asparagus ferns as tiny Christmas trees that grow in the garden. Or it might remind you of Psycho Bob’s hair from the Simpsons. Only the psycho ferns are actually green, not maroon. Whatever the asparagus fern, it is definitely not asparagus. But plants often get bizarre names for no apparent reason.

Asparagus fern is a natural air purifier and a filter that absorbs toxins and chemical pollutants from the air. So you can grow it in a room so that it smells fresh and improves the air quality. In addition to its bushy and wild green fronds, the fern also has tiny white flowers. They don’t stay in bloom for long and soon fade whether or not they are pollinated. When pollinated, red berries replace the flowers. You can plant these berries to make new ferns.

Note that this is not a kid-friendly plant. If you plan to grow it as a houseplant, keep it out of the reach of children. These bushy fronds are anything but soft. In fact, they are small thorns that cover the length of the frond. I recommend keeping the fern in a hanging basket where it will purify the air without harming anyone. If the humidity in your home drops below 50%, misting is required on a regular basis. 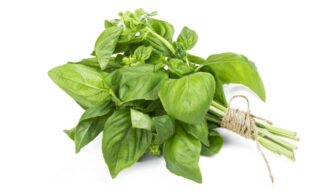 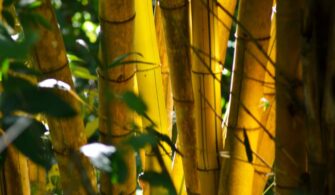 How to grow the golden bamboo 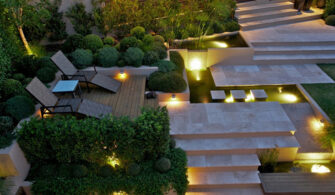